Charnos is, in my opinion, one of the most under-rated full bust lingerie brands on the market. They’re available in all kinds of places (including Brastop and Figleaves), and they consistently put out gorgeous colors that reflect current trends. So why aren’t more people talking about them? 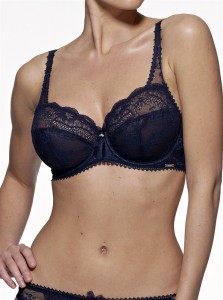 All I know is that lots of full-busted women are missing out on a great brand. They technically only make up to a G cup, but their cups run very large for most people. For instance, while I’m a 34GG in Freya, I’m an FF/H in Charnos. It’s definitely worth giving one a try to see if it works for you, even if you’re slightly above a G cup.

I only have the full cup version of the Cherub, although the Charnos website lists a padded balcony version as well. I suspect it would be equally great in a different style. However, let’s move onto the actual bra. 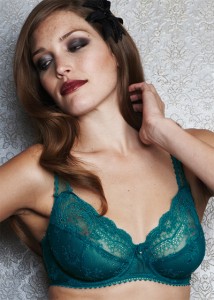 My cherub is in emerald, and it’s a gorgeous rich green that is hard to find in lingerie sometimes. It has a cute diamante detail and several small bows, but it’s definitely not as ornate as some other bras out there. The full cup version of the Cherub is an unpadded full cup lace bra, so it won’t give you incredible cleavage. What it does do is provide great support and stay put no matter what you do in it. The lace is soft and supportive, and the bra itself has enough cute detailing that you feel like you’re putting on something really special. It’s rare that you find an every day bra that is also incredibly pretty, and as a result I find myself reaching for my Cherub bra several times a week. 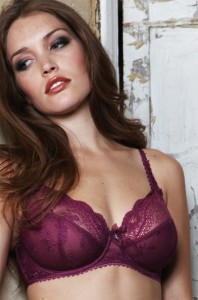 The Cherub bra currently comes in a midnight blue color, and can be found in emerald green and pink on Brastop. They’re also putting out a red version for the holidays that is high on my list! I suspect that I will be buying different colors of the Cherub bra for a long time. 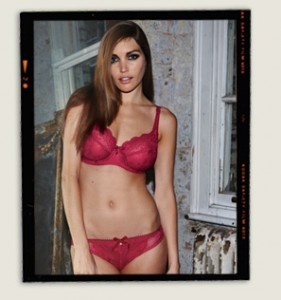 Charnos Lingerie can be found through their website, or through Brastop and Figleaves. Have you tried a Charnos bra? What was your experience with it?