Today we have a guest post from Kelsey, who watched the Victoria’s Secret Fashion Show and had lots to say about it as a result. When you’re done reading, you should also go sign up for the giveaway that we’re running with Knickerocker!

In case you live under a rock, I should inform you that the Victoria’s Secret Fashion Show invaded CBS network Tuesday night.  When it comes to the company, I’ll admit that I’m completely torn.  I love the style of all of their products, I’m a sucker for lace, bows, things that sparkle, and basically anything that screams, “Look at me!”  So, Victoria’s Secret sucked me in that way.  Unfortunately the fit of their bras is atrocious, and the “expertise” of their employees is even worse.  That being said, I continue my unhealthy relationship with the company because their branding simply won’t let me move on. And the annual fashion show is the perfect example why.

For those of you who don’t know, the fashion show started out many years ago as a way to show off the way the company has transformed underwear into, basically, works of art.  Over the years, I’ve seen it develop into more of a spectacle, with performances from chart-topping artists, the angel wings growing bigger and bigger (while the models seem to shrink), and different themes developing for each part of the show–this year they included: Circus, Calendar Girls, Silverscreen Angels, and In Full Bloom.  Regardless of your views on the company, its hard to deny that it’s one of the sexiest forms of entertainment. 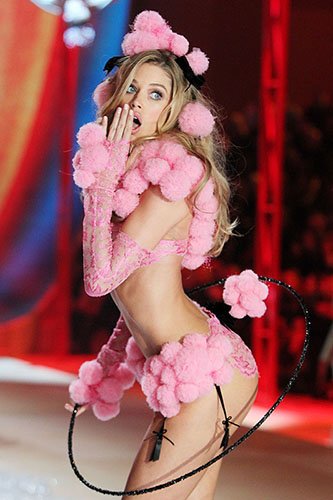 However, there was one component they added this year that really just irked me.  The behind the scenes footage and commentary had the models explaining their favorite parts of being a coveted Angel. Traveling, shooting with famous photographers, and the holiday commercials were amongst the frequented responses, followed by one model’s statement that she loved being part of something that was so “empowering to women.”

I love the garments and I think the models are gorgeous, albeit a little too thin, but who are they kidding here?  Myself and about 60% of the girls on my campus tweeting about “time to stop eating,” or “let me just grow two feet and lose 45 pounds,”  followed by the hashtag, #VSFS2012, would argue that the last thing Victoria’s Secret does is empower women.  After that commentary was aired, I noticed the Victoria’s Secret Twitter and Instagram accounts coincidentally started making a couple posts about either the new workout videos that are integrated into the sport clothing line, and pictures of the supermodels working with a chef to prepare healthy meals.  This all gave the immediate illusion that the models maintain healthy lifestyles and that towering at 5’11” and 120 pounds is all part of being a “normal woman.” 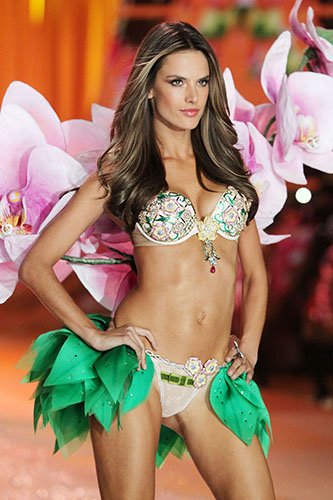 To be clear, I have nothing against the models themselves, but at least own up to how you got to where you are.  The reality is that being a model means maintaining your body and your image is your full-time job.  An unrealistic possibility for pretty much every other woman on the planet.  Then, they replay video footage and images with the Angels strutting around in lacy thongs and claiming these models don’t need a man to feel beautiful.  They can feel confident, sexy, and beautiful all on their own as long as they have their Victoria’s Secret lingerie sets on. Right. I’m sure it has nothing to do with the fact that they’re all tall, thin, bronzed, waxed, toned, and buffed to perfection.  But if they want to call that “women’s empowerment,” then so be it.

I guess I’m just wondering who they’re thinking they’re able to fool with this new marketing initiative.  Like, which one of their employees spoke up at a brainstorming session and said, “Hey, after the incredibly select group of Angels are done prancing around in their underwear without a jiggle in sight, let’s have one of the models say that it’s about women’s empowerment.  Yea, I think that’s a home-run idea.” 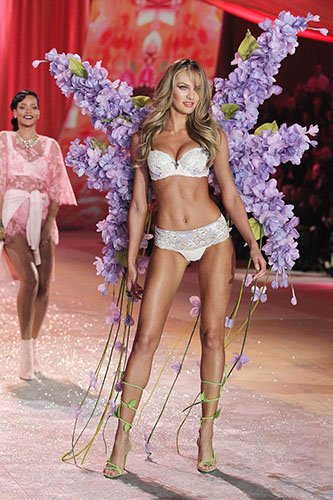 To me, Victoria’s Secret has always been more about the sex appeal than the function.  Which is fine, it works for them, and occasionally I buy into it because bows make me feel pretty.  BUT, don’t you dare take over social media for a night and shove your perfect bodies in my face as I switch to eating a bag of celery for dinner, and tell me you’re empowering me.  Just be upfront about what the brand is about, and don’t try to tell me it’s normal or in anyway healthy for women to look up to.

That being said, I’ll sign off with with this lovely excerpt quoted in a Daily Beast article from one of the most notable Angels, Candice Swanepoel.

Must be nice….Not that I’m bitter or anything.

What do you think? Am I overreacting? Do you agree/disagree/even care?