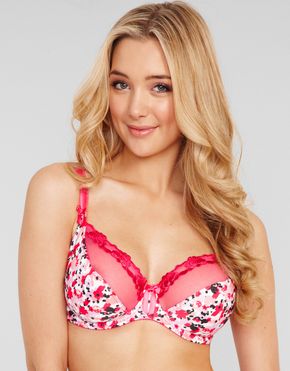 I have a terrible confession to make: I am a wimp who has spent the last two weeks in her house covered by a blanket while wearing thermal leggings and whining about the cold. My complains finally felt justified when it snowed last week, which is completely out of character for Mississippi and felt a little like the Twilight Zone. Part of this leads to today’s pick of the week, which is the warm and summery Lottie bra in a new raspberry colorway. I was gifted several Curvy Kate bras last year for a big review on The Lingerie Addict, and the Lottie bra was by far my favorite. It’s one of the most comfortable bras out there and holds up forever. If you’re a fan of having your boobs under your chin this bra won’t be your thing, but it’s a nice natural look and works beautifully under t-shirts and sweaters.

I realized that I hadn’t taken the time to talk about the new Curvy Kate collection, so I thought I’d do that today. I’m really torn about some things in it, and I thought it was worth putting them out there.

I’ll start with the good news: I think this collection by Curvy Kate is the strongest yet in terms of design. They have everything from classics with a twist to multiway bras in gorgeous fashion colors. I love so many of the new offerings, and I think Curvy Kate has finally settled on a unique and incredibly appealing aesthetic that works for a wide range of body types and ages.

This all looks great, until you see that most of these bras stop at an HH cup (or a J cup if you’re a 28/30 band). The Princess is actually an exception to this rule, and one that I’ll definitely be picking up to try out this season. That said, most of the line that goes above an HH cup looks like this:

While everyone needs an awesome t-shirt bra, the designs do tend to look more run of the mill as the cup sizes go up. Now, I’m not trying to be down on Curvy Kate specifically. I love their bras, and they’ve been a leader in pushing the full bust market further into the future. But, as a customer and a blogger, I feel sad when I see one more picture of someone shoving themselves into a Showgirl line bra with the caption “just one or two more cup sizes, please?”. This isn’t helped by the fact that the whole Showgirl line runs small in the cup, so sizing is even more restricted than it appears on paper. Even worse, I think it can unintentionally discourage HH+ cup women from entering Star in a Bra, which is a great piece of marketing and a great way of showing non-models in Curvy Kate lingerie.

Curvy Kate has been a trailblazer in so many ways, and they’d be the perfect company if they could just expand their sizing a little bit! Changing things around so all the bras in their line worked up to a K cup would be icing on the very nicely decorated cake.