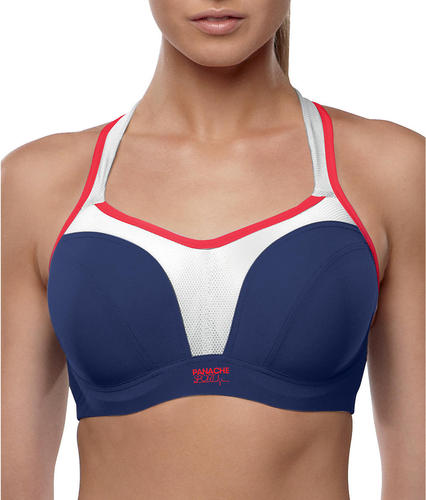 I’ve been feeling gradually more and more let down by my current sports bra collection, so last week I finally decided to go searching for a better option. After asking around, I decided to finally take my chances with the Panache sports bra that everyone seems to love. I’d always assumed that I would be sized out, but everyone assured me that it ran large. I hear that a lot about various bras and was pretty skeptical, but it turns out that it runs about two cup sizes larger than advertised.

After asking around, I decided to try out a 34H since I often need to size up in cups due to my denser breast tissue. For comparison, I can wear anything from an HH to a JJ cup and wear 32 and 34 bands in various brands. My best fitting Panache Tango is a 34HH.

This sports bra relies on encapsulation rather than compression, which means that your breasts aren’t squashed down. I’ve only ever worn compression based bras and feel sort of dopey for not having tried encapsulation style bras before. While this bra is great for indoor things like yoga, it really shines during hardcore activities outside in the heat. The mesh and foam design combined with the underwires make it supportive and breathable, which is a revelation when playing tennis is 85 degree weather. Instead of literally running around with a pool of sweat stuck to your body, moisture is wicked away to help you stay cool. I don’t feel as strapped down as I do in my compression bras, but I can also breathe much deeper and feel much cooler.

Speaking of tennis, the biggest difference I found was how this bra literally helped change my center of gravity while playing. Compression bras make my already large breasts wider, to the point where it interferes with my serving motion when I play. This bra pulls me in and gives me more forward projection, which helps me center myself as well as giving me a full range of unmodified serve and shot motions. I think playing in this bra was the first time I’ve ever forgot about my breasts during a tennis match. After using it for a week, I can see a real difference in both my comfort level and in my tennis score. Unless I’ve had a miraculously good tennis week, the only change is the bra.

The two downsides of this bra are small and to be expected: it’s handwash only and it’s pricey. Prices range from $61 to $68 at most places, although I just picked up one in a flash sale yesterday for $40! Make sure you check Amazon and Bare Necessities for sales before you buy, as they seem to put certain colorways on sale once in awhile. Since this bra has underwires, you can’t put it through the washer or dryer. While I don’t mind the extra effort, it does take awhile to dry. This means that if you work out at night and then want to do some yoga the next morning, you’ll have to buy a second one or use a different bra. 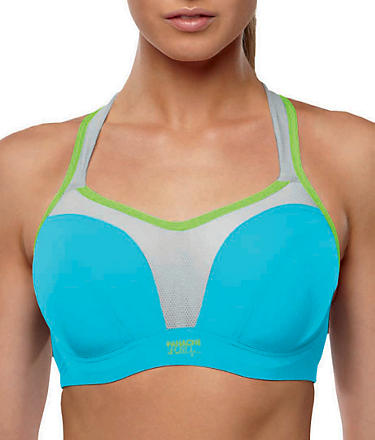 In addition to this bra being functionally awesome, it comes in six different colorways. I originally picked up the grey version and bought a second one in navy on sale yesterday. I love this teal and lime colorway as well, so I’m looking for an excuse to pick up yet a third one.

This is an amazing sports bra which has a much wider size range than advertised. If you’re in the HH or J cup range, make sure you check it out!