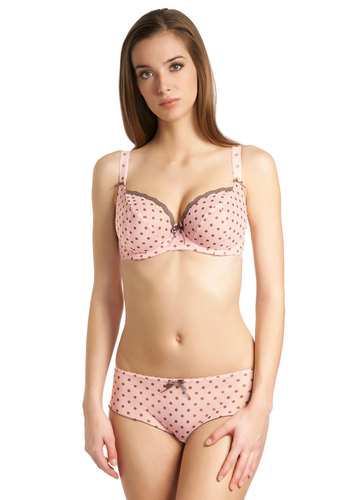 One of the requests that came out of the survey was for more articles that dealt with the business side of lingerie. I write lots of marketing advice articles, but I don’t write much about the specific issues. Part of this is because general issues for me often become work specific issues and client confidentially comes into play or because at the end of the day I’m so exhausted that I can’t deal with thinking about this stuff anymore. I’m hoping that this will be the first in a series of articles that will explore issues in the lingerie world from both a business and a consumer perspective. One of the things that I see the most is consumers and businesses pitting themselves on opposite sides of issues unintentionally. By pulling back the curtain, so to speak, I’m hoping that I can help us all understand each other a bit more so everyone can work together!

The charts that I’ve included below are from the brave Erica at A Sophisticated Pair, since she was good enough to publish nice scientific sales figures. To my expert eye, her sales figures are fairly representative of industry trends as a whole so they’re a good visual aid for this kind of thing. What I also like about Erica’s sales figures is that they’re fairly size accurate – most of her customers are measured in store, so we know that there shouldn’t be a huge difference between perceived bra size and actual bra size.

The divide between retailers and consumers over 28 (and 30 band bras to some degree) is both simple and complicated. Retailers feel like these bras sell in fewer numbers, are returned more often and generally consider them high risk stock. Consumers who want bras in their size claim that retailers aren’t offering enough choice in 28 bands and that they would make more sales if they stocked more options. So where’s the truth? Like most things, it’s probably somewhere in the middle.

Stores are obviously driven by profit, so let’s start by talking about sales trends and demographics. Erica’s sales of 28 and 30 band bras have risen by 0.94% since last year. This shows a definite uptick in real sales, which matter to retailers. However, you have to put this in context.

Check out this chart: 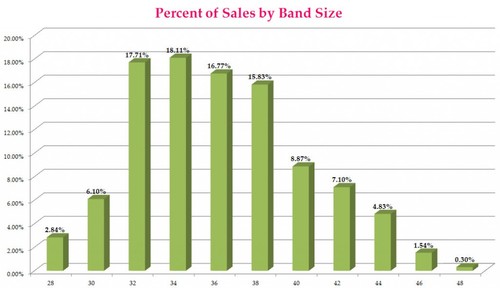 Image via A Sophisticated Pair

See how sales skyrocket from band sizes 32 to 38? Even with the increase in 28 and 30 band sales, it’s just a fraction of the money that Erica’s store made this year. As she says in her very smart blog series, this isn’t surprising as the average US woman is now a 12/14/16. Her most popular brand is Elomi and she can literally sell eighteen times as many 32DDD’s as 28DD bras.

There are other problems with 28 and 30 band bras from a retailer’s perspective. Women in these sizes tend to be younger and therefore don’t have as much disposable income. Returns in these band sizes are also high. We’ll talk about why in the consumer perspective section, so keep it in mind for later. From a business perspective, returns are a hassle and require paying people to deal with them. Often returns end in refunds, which basically means that you’ve put out money in terms of staff hours to deal with what is essentially a loss. Sizes that have a high return rate are considered higher risk and companies are understandably unwilling to stock a wide variety of bras that will just be returned or go unsold.

I’ve heard lots of talk about the new luxury small band large bust companies popping up, which I think are relevant to this discussion. I’m thrilled about the styles that these new companies will be bringing a badly needed part of the market, but I think luxury items in this part of the market will be a hard sell. After all, if you can’t sell a $50 bra profitably why would you stock a $150 bra in the same risky size range? I predict these companies will need to develop a following and do some serious e-commerce to stay profitable. In this case, they can sell directly to customers more easily than they can to some retailers.

Let’s move on to consumers, who obviously have their own valid opinions about this situation. There are lots of reasons that consumers believe that demand for these band sizes aren’t being accurately reflected. Some of these include:

• Women are wearing the wrong bra size, which commonly leads to women wearing a larger band than they need. If more women wore the right band size, there would be more demand for smaller bands. Like I said, this isn’t reflected in Erica’s statistics, but I suspect would be a large part of the statistics of a place like Figleaves or Bare Necessities which aren’t measuring customers themselves.
• Retailers aren’t stocking enough variety in terms of shape. Since bra fit is about more than the numbers, if a retailer only stocks two 28 band bras that aren’t the right shape for you, they won’t see a sale at the end of the day. By stocking a great variety of 28 band bras, customers could find more to buy. This also plays into the high returns issue.

All of this brings us to the current situation. Retailers are understandably reluctant to take on more high risk stock, while consumers are logically against keeping bras that don’t fit them for the sake of generating sales figures.

I wish I could end this article with some pat piece of wisdom, but I don’t really have one. The issue is complicated and probably has to play out longer to come to some conclusion. Having three luxury small band full bust companies enter the market soon will be a game changer and probably either show that there is a big market for this or that it ultimately isn’t profitable at all except on a very small scale.

Do you see any solutions for companies and consumers? What do you think of the potential luxury market for small band bras?